We Got the Power! 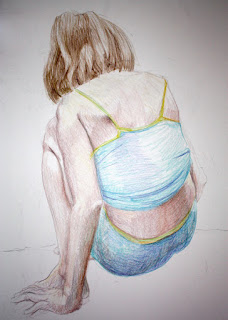 What keeps many artists motivated? A strong connection to feeling and emotion that drives their creative process.

I teach adults to make objects with art-making media. That’s the simple description of what goes on in the class. The complexity is teaching them how to make those objects be art, as opposed to being artistic or creative. What’s the difference, you ask? Emotional truth. Art happens not only when someone masters a tool, medium, technique or style, but when that process is powered by feeling. For something to be ‘expressive’, the art world’s word for emotional truth, it must express SOMETHING. And that’s where adult students run into serious trouble.

Now, the best place to go looking for true feeling is at the moment of first contact with an experience, whether that experience is physical, like riding a horse for the first time, sensory, like stroking a dog’s fur or touching a snake, emotional, like hearing about a loved one’s accident, or intellectual, like having an ‘aha!’ moment in a science experiment. All types engender strong feelings that remain with us long after the experience becomes history. For many of us, however, the clearest memories of feelings are of those we remember from childhood. By the time we’re adults, we’ve learned a number of feeling-suppressing techniques, like moralizing or judging, or ways of explaining, justifying or wallowing that obscure the pure, original experience. Our response as been-there-done-that sophisticates becomes not about remembering the feeling but considering what we did or thought about it, or what others expected us to. That makes imbuing works of art with emotional truth very difficult for students.

Example: In responding to an assignment given to her by another teacher, a friend recently tried to identify the emotion a favourite story inspired in her. The object was for her to then render not the story as an image, but the emotion it inspires in her. That’s a sophisticated exercise that depends on the student’s level of self-awareness: in a state of self-observed reverie, the student must recall the story’s emotional impact, not its content alone or the thoughts or ideas it subsequently inspired. Children do this naturally. Many adults have to relearn it.

This is the story my friend turned to for her assignment; she recounted it to me as it was told to her (there are apparently various versions but they aren’t the object here) :

Six men are stranded by a snow storm in their far north camp in the woods. They are away from their families, and it’s Christmas. The Devil appears to them and makes them an offer. He will send them home for the holidays and return them safely to their camp IF they refrain from swearing or cursing the entire time. The men agree. A canoe appears and they embark though the river is frozen. Suddenly, the canoe rises up and flies as they row. As it covers distance, the men agree that they will not drink during the revels; if they remain sober, they will avoid all temptation and be safe. All goes as planned with five of them, but the sixth drinks, swears at home, and on the way back, he falls out of the canoe and curses. Thinking the Devil won’t have heard, the men manage to haul him back in, maybe they gag him (that part was unclear in the telling) but when they arrive back at their camp, the canoe dumps them all in the snow. Do they end up in Hell? My friend didn’t know. In fact, she didn’t remember ever actually hearing any other ending to the story, though she inferred that the men had been damned by the one’s indiscretion.

In contemplating why this story resonates with her, my friend told me she had trouble trying to create an image to express her feelings. It is a favourite story of hers, but all she could think of as a related emotion was fear. The story’s moral was clear to her: sin and be damned.
“Are you religious?” I asked.
“No,” she answered.
“Why fear then?”
“I’m supposed to fear; it’s an example.”
“To some maybe. But is that what keeps the story alive for you, its moral?”
“Well, no.”
“Anyway, you’re thinking about it through your intellect, not connecting with your feelings. What struck you when you first heard the story?” I asked.
“The flying canoe!” she answered.
“What about it?”
“What a wondrous thing!” she marvelled. “What a sight that would be to witness!”
“There you are!”

So her task, no simpler now but more true, is to somehow render an image that will convey her wonder. How much more compelling that expression will be than one programmed by other people’s interpretations of the story, by what it’s supposed to convey (perhaps only in that version)! However she chooses to render her image, it will be emotionally true to her experience of it. Now that will be a lesson well learned!
Posted by Claudine Ascher at 15:14