Ten Steps to Help Save Our Culture 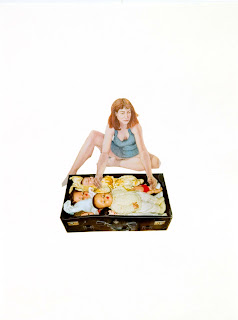 I was recently part of two exhibition events in the suburbs of Montreal, one for which I was the invited curator, and one where I helped an artist friend set up her booth. Each event involved many member artists of local associations and a large variety of compelling, affordable works. Both were meant primarily as sales events. In both cases, there were no gallery or other commissions. Despite all that, and as far as I know hardly any works sold out of both events, and neither event was heavily attended by the public despite beautiful locations, good parking, great weather, and good advertising and promotion campaigns by all involved.
What is wrong with the audience? It’s a question that has long bothered me.
We live in a city, Montreal, and in a province, Quebec, that tout themselves as cultural, even multi-cultural, but ‘the culture’ has in large part to be accessible free of charge. People will turn out to look and be entertained, but very few will support by buying. Summer festivals with their large, temporary crowds may include sidelines of visual arts displays, but the focus is on free outdoor performances and on massive ticket sales for indoor events. Art exhibitions, whether in established galleries, alternative spaces or art fairs, may draw viewers, but too few, and too few of those walk away with a work of art.
There are many excuses. As a gallery curator, I have heard them all, from works not matching people’s furniture to the uncertain economy They are all lame. People are still buying electronics, cars, going on expensive vacations, throwing or recycling tons of stuff, even indebting themselves to do so. They have been conditioned by ‘the marketplace’ to want, even to need mass-appeal or mass-produced things, which need to constantly be updated.
The fact is that people are not brought to understand, appreciate or really value visual languages; they are neither nurtured as practitioners nor encouraged as real consumers of the visual arts. This is not accidental. Education in the arts has been systematically eliminated from the public school system by government after government. The excuse there is that the born artists will find a way to learn and create, they will even manage to thrive if they are chameleons and can multitask naturally, or they can go earn a living in other countries. But the reality is that professionally, those who stay will have culturally undereducated, under-appreciative, entertainment-hungry audiences who blather on about ‘creativity’ and ‘culture’ but who are blinkered, intimidated or cheap when they actually encounter either without a huge crowd around them.
I have been observing this growing phenomenon for more than twenty-five years. I blame both provincial and federal governments, and all species of politicians. This is especially blatant with the current Conservative government that has taken the elimination of the arts and therefore the undermining of our culture to new heights.
This Conservative engine runs on oil and other exploitable natural resources. It has meant the worship of money, and the conservation of the power status quo through fear mongering, gagging new attitudes, eliminating any threat of change, and now with bribing for votes. For this to be effective, there must be a population focused on self-preservation that is not too informed. People who know this are leaders in countries we consider ‘enemy’, but they also seem to be serving as models for our leader. This is clearly why artists, scientists, reporters, First Nations, and many other possibly dissenting people are being gagged, discredited or treated condescendingly.
This is why, without their realizing it, people’s ‘culture’ is becoming devoid of individuality, of personality, of a national identity and of real choice. It’s why people’s homes are being stuffed with the same quick-assembly, replaceable, increasingly imported stuff from coast to coast. The economy this supports is about making political parties through their supporters rich so the arts, especially if people live with them, are out because they encourage people to slow down, to think, to feel, to really plunge into an experience without needing to be ‘extreme’ about it, and to be fully engaged.
Politicians know you gotta get them young to stop real engagement from happening. Without culture through the arts, without art education, people become unimaginative, uncritical, superficially judgemental, indecisive and complacent, in the end not wanting to be bothered. They come to believe ethnicity is the sum total of culture and become defensive of theirs. They don’t share or exchange or respect. It’s just what the government ordered.
Some people may like this state of affairs. After all, governments in this country are elected. If others don’t like it, however, they might wonder if there is an immediate counter-measure. There are numerous ones. Here’s a ten-step one:
1.              Frequent a couple of galleries regularly alone, with friends or if you have one, with your family.
2.              Look at work you like and compare it with work you don’t like.
3.              Talk to the curators or to the artists if possible and ask questions – here are no ‘dumb’ questions but avoid assumptions. Good galleries or dealers will be happy to engage, it’s their job.
4.              Encourage kids, even if they're not yours, to do ask questions. LISTEN. Make sure they get some kind of answer.
5.              Voice and share your opinion, let the kids voice theirs so that there can be a conversation.
6.              Get to know the artists’ body of work.
7.              Identify those works that mean something to you or that make you feel (anything goes).
8.              Forget your décor and buy original art pieces by actual, living artists. Pay the money.
9.              Install the art you buy prominently in your home.
10.           Live consciously with it – tell yourself it’s not decoration.


People who follow these ten steps this will be amazed at the effect they will have, even short-term, even one person, one family at a time. Then they might well understand how they have been deprived, how generations are being limited. Maybe they’ll be inspired to do something about it.
Posted by Claudine Ascher at 08:33